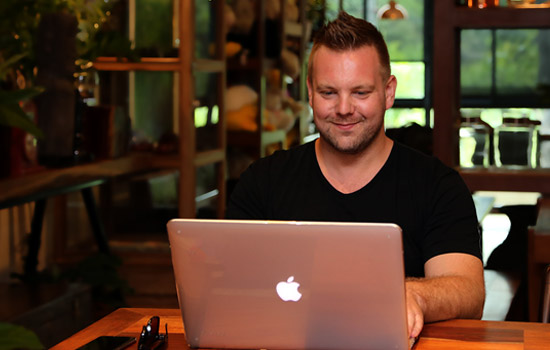 I run several online businesses and make cool side projects. I’m a professional WordPress developer and make awesome websites. I’m also an experienced marketer previously heading up the marketing teams of several successful startups. I’ve done a lot of other stuff, including running one of the world’s best internet radio stations.

I’m location independent, travelling while working remotely from anywhere with good internet. I blog about the digital nomad lifestyle and moderate several digital nomad Facebook groups (Worldwide, Chiang Mai, Koh Lanta, London and a few others) with a reach of 150,000+ nomads and remote workers. I’ve been featured in publications such as Fast Company, Huffington Post, The Bangkok Post, and given presentations around the world about this lifestyle.

I’m a WordPress-focused developer that makes high quality, fast and SEO optimised websites. I’ve been working for years with creative and digital agencies that are looking for high quality, highly customised websites, that not only work well but also help make more money and generate new business. I apply my business, marketing and SEO skills to every website I develop which creates great results.

Find out more about how I work and my availability as a professional WordPress developer.

My names is James. I was born near Chelmsford in Essex, in England, but I now consider myself a Londoner after living there for more than half of my life. My base is still in London, but since 2014 I have been travelling the world full time.

My company is The Two Percent. It’s a random name that’s suitable for my random mash of businesses. The phrase came from an old design and print business I ran where I would take delight in judging the artwork sent in to our company – everything was crap, apart from just a couple of things – the 2%! The good stuff. Later I discovered that there is an adage known as Sturgeon’s Law, where “ninety percent of everything is crap”. Clearly I have higher standards.

I’ve been an entrepreneur before I could even spell the word. They say the “dream team to make a company succeed is the hipster, hacker, hustler” combo. I’ve always been a hustler, seeing angles, seeing the business. I’ve always been a hacker, fixing stuff for the quickest, easiest, efficient route; and I like to think of myself as a bit of hipster, always first on the latest trends, making sure the latest design and technology advances are exploited for satisfaction and growth.

According to CrystalKnows – I’m a “direct communicator that makes decisions independently and objectively, often disregarding formality or existing standards”. So to translate that – I’m fairly blunt, give honest opinions disconnected from personal connections, involvement or emotion, and I have little care for official rules if it gets things done.

I have ran several of my own businesses, some really successful, some that had potential I didn’t realise, a few failures. I’ve been formerly employed by a lot less companies – I think my spirit of “disregarding formality” (as above) doesn’t lend me to working inside other companies unless the leash is long. I prefer consulting and this works even better when I believe in the company, the mission or the people. If I’m going to do something, I want to do it properly and I want it to be the best.

Based on my education (BA Hons. in Business and Marketing) and career, I’m a full stack marketer, but I’ve been coding since I was 7 (10 PRINT “Hello”, 20 GOTO 10, Run, is coding, right?), with dabbles in everything else on the side. Guess that would make me T-Shaped? I’m really not sure anymore. I know I’m frustrated with the way most companies see marketing as an afterthought, so now I do what I enjoy – coding and working on my own businesses.

Some of the businesses and side projects I’m currently working on:

I work with companies and creative agencies as a professional WordPress developer. My clients are based all over the world – London and Leeds in the UK, USA, Hungary, UAE, Bali, Taiwan, Lisbon and more – but I work for them remotely, never stepping foot in their offices. I develop high quality websites and I’m a WordPress specialist.

A location independent guide and blog for digital nomads. I like writing, and this lets me indulge in this alongside helping people with my thoughts and advice to cut through the nonsense and dispense crystal-clear information about becoming location independent.

Music is a passion of mine, and this internet radio station, forum and chat community was setup in 2001. With over 25,000 forum members, 3 million page views per month, a 24/7 live internet radio station with an average listener level of 750 listeners (a max peak of 2500), a range of merchandise, a compilation CD release, and numerous club nights and events around the world; this hobby has been a really interesting enterprise to run. The community and radio have picked up various awards, including a BBC Radio 1 Peoples Choice Award.

A website dedicated to Seth Godin’s Book Recommendations. A fun little project that I did to help people discover their next great book to read.

No Need To Think

I love the concept of subscription boxes, and this is an idea I had bubbling for a while – a central resource for finding subscription services, built on reviews and offers. More of a pet project for myself, it’s also a fantastic passive income source.

Responsive Resizer for Safari on MacOS

A browser extension for Safari users so they could responsively test web designs. Since Catalina, the extension needs an update due to security changes, but the extension is still used by a lot of people who haven’t yet upgraded.

I have a few other projects and businesses not listed here. A few more utility websites, I sell my own custom product on Amazon.com (via Amazon FBA), have a large collection of T-shirt designs on Amazon Merch, and have property for rent on AirBNB.

(2015-2018)
Sitting in a pool in Koh Lanta, we were discussing why it was so hard to buy good fresh coffee. All the local supermarket had was old crap coffee. Inspired by Pact Coffee in UK, 2 weeks later I had set up a coffee subscription business, shipping freshly roasted or ground beans out to customers all over Thailand and SE Asia. The market was small, but customers were loyal, and it took 5 mins to run every week.

(2017)
A business mastermind retreat for entrepreneurs. Born out of my need to travel but be surrounded by high-level minds, I built this travelling retreat so I could explore new places alongside great people.

(2016)
The more travelling I do, the more I find that people discovery is an issue. Don’t Eat Alone is trying to fix the problem of eating alone in a city near you. I couldn’t get traction on this project in its current form, but would like to revisit it where possible.

(2016)
Simple ecommerce analytics for busy store owners to keep their sales on track and not get distracted by vanity metrics or jargon. A SaaS business model that can help any store grow (yes, even yours!).

(2014-2016)
Get curated professional freelancers working on your projects instantly. Designed to fit between a traditional agency and an outsourcing site, Airborne allows companies to get top talent working on their high-end design, development and content with simplicity, transparency, trust and safety, saving time and budget without compromising on quality.

(2006-2015)
The International Breakbeat Awards was setup in 2001 to recognise the best talent in the breaks scene. Due to my involvement with NSB and knowledge of UK club scene, the original organisers asked me to run the annual awards from 2007 onwards. Attracting up to 4800 people over 2 events ever year, Breakspoll has been held at some of London’s top venues, including Fabric, Matter, and Cable. In 2009, we even took the concept to Spain for a massive Breakspoll Festival, attracting 10,000 people to a stadium in Seville.

(2013-2015)
A leading player in the smart home and internet of things space, HomeMonitor is a Wi-Fi camera that keeps people connected to what they love from their iOS or Android devices. Focused on simplicity with a cloud platform backend, the product has been a huge success, even without funding. Multi-award winning, HomeMonitor has been featured in the likes of The Times, the LA Times, TechCrunch, Engadget, T3, Wired and more.

(2012)
BabyPing was a Wi-Fi baby monitor for iOS, I was heavily involved with all aspects of this app-connected wifi camera. From concepts, to design, to hardware, to user testing, to UX, to UI, to marketing, to launch, to retail. The product was a huge success in the media – multi-award winning and highly praised – including being covered by BBC News, however the market was not as big, or as fast growing as expected, and the product was spun off so the team could focus on bigger markets.

(2009-2013)
A leader in building innovative remote monitoring equipment so people can stay in touch with whatever is important to them from anywhere in the world, I headed up the Marketing team for this small startup that quickly grew in to a powerful company with products being sold by top retailers in over 35 countries and saw OEM deals with the likes of Vodafone, Gigaset and o2.

(2007-2012)
I completely rebranded a cocktail bar in 2007, putting my stamp on it and becoming near-enough a full time marketing consultant there. Profit targets were set and smashed consistently, month in month out, and we were lucky enough to attract regular clients such as  GQ, Vogue, ITV, MTV, Dazed & Confused, and Channel 4, eventually seeing a successful exit for the business. Mixmag now run the venue.

(2006-2008)
Music industry promotions and PR. I started what can only be described as a guerrilla marketing company, combining my print, web, and email experience, laced with some genius creativity, to pull off some amazing street promotion campaigns for the likes of Roll Deep, Matter Nightclub, Glade Festival and Breakspoll. We used innovative techniques like reverse graffiti combined with the latest web trends to really grab peoples attention and get real interest and viral spread.

(2002-2007)
A printing company with the web at its core – I transformed a 25-year old small business and took it to the forefront of supplying litho and digital print to the music & entertainment sector within 18 months. Over the five years I was with the business, I was wholly responsible for the rapid expansion of the companies marketing and sales activity – direct and indirect marketing, overseeing massive developments and improvements in e-commerce, CRM introduction and development, SEO, PPC campaigns, sales targets, promotions, business finance and acquisition, employment and much more, eventually seeing a successful exit for the company.

(2001-2002)
A subsidiary of Ford Motor Company, I was working on web marketing for clients such as Massey Ferguson, Jaguar and Rover, where I learnt all about Six Sigma and Lean Manufacturing (so I can honestly say I was in to lean way before Eric Ries…) and where I developed a real taste for internet marketing playing a wide role in the complete marketing landscape.

(1998-2003)
Music industry promotions. Paradox allowed me to work with email marketing, a first in the industry we were in, using cutting-edge design and delivery techniques, combined with SMS broadcasting and data capture. I worked with world-class companies such as Ministry of Sound, Universal and Warner Music, and was featured in a magazine article entitled “Pioneers of Email and SMS marketing”.

(1997-2003)
Club night and website. Marketing itself across three different musical styles (Hardcore, Drum and Bass, Old Skool), Epidemik saw crowds of 500 – 2500 people at their event, filling major UK venues like The Fridge, Bagleys Film Studios, The Rex, the Junction and Ministry of Sound to name but a few. The web operations of the company involved building a large online presence, with a respected events listings page and regular news.

Check out my blog, find me on Twitter or Linkedin.